In ARFID, a person may experience food disturbances to the point that they do not meet their appropriate nutritional and/or energy needs. In simple terms, the person is not getting a wholesome diet due to the complications of ARFID and because it forces them to have a very limited interaction with food.

A person may feel unable to eat with other people. They may prefer to avoid new foods with intense textures, tastes or smells, opting instead to stay with foods they know well. This can make trying new foods challenging. Others may not feel hungry often, or feel full quickly.

Avoidance, once established, can become longstanding and hard to change. The more a person avoids eating, the scarier it becomes.

Underlying biological factors such as a flavour preferences are partly genetic and can influence food choice.

ARFID may occur during childhood, but it can also develop in adults.

In some instances, children affected by autism spectrum disorder may experience ARFID.

There are three primary components to ARFID: 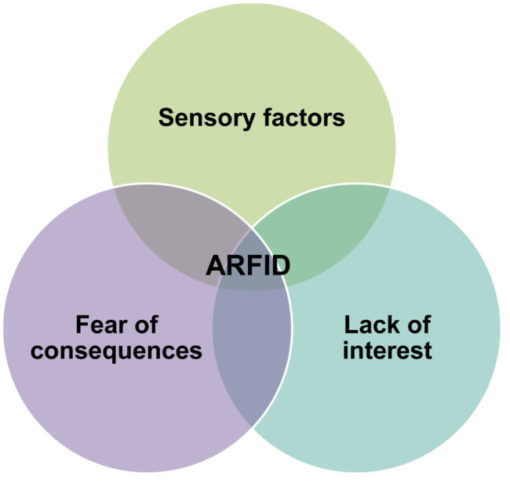 Currently, little is known about effective treatments and interventions and the course of illness for individuals who develop ARFID. There is limited research on the how and whether picky eating contributes to ARFID. There is a lack of systematic data on the dietary characteristics of the disorder. Other unknown factors include the age at which ARFID develops and whether or not it presents as a risk factor for later-onset eating disorders. There is little is known about ARFID in adults. There is not enough research to determine the extent to which ‘picky eating’ may play a role in the experiences of children or adults with ARFID.

Research has also identified behaviours and difficulties such as:

There may be some body image concerns, though different to those seen in cases of anorexia and bulimia. In children, there may be a fear of physical illness related to shape/weight for example, high cholesterol and/or obesity leading to heart disease. Research has noted that some children were underweight due to feeding and eating disturbances had reported teasing from peers. Those with ARFID may be less likely to report typical eating disorder behaviours such as purging and excessive exercise.

A diagnosis of ARFID would not be given if the nutritional problems are better explained by a lack of available food or a cultural practice/tradition (such as religious fasting), or if the person has substantial and profound dissatisfaction with body shape or weight (such as in anorexia nervosa, or bulimia nervosa, or if the clinical problem is better accounted for by an existing medical condition or another mental disorder.

As with all eating disorders, there is no know one size fits all treatment. Please see the Bodywhys Treatment Guide for information on treatment pathways. Sourcing a dietitian with knowledge of sensory issues around food and with knowledge of ARFID may be helpful. Paediatric psychology/psychotherapy the for child and family, alongside a paediatric occupational therapist and a developmental paediatrician, are also options to consider.

*Note – these therapeutic treatments are relatively new and may not be widely available yet.